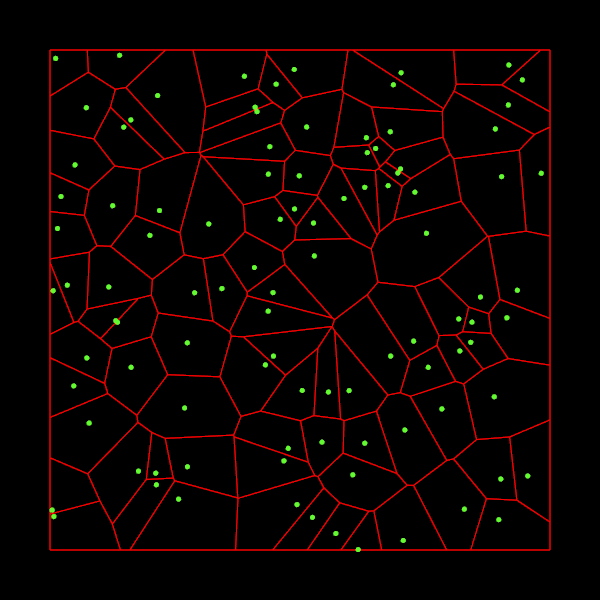 What is remarkable about the Fortune’s algorithm is that it constructs such diagrams in \(O(n\log n)\) time (which is optimal for an algorithm which uses comparisons) where \(n\) is the number of sites.

I will not explain how the algorithm works. Because other people have already done it well. I can recommend you these two blog articles: here and there. The second one is really cool since its author made an interactive demo in Javascript which is useful to understand how the algorithm works. If you want a more formal approach and to see all the proofs, I advise you to read the chapter 7 of Computational Geometry, 3rd edition.

Moreover, I prefer to tackle the implementation details which are not as well documented. And they are what makes this algorithm so hard to implement correctly. I will especially focus on the data structures I used.

The first issue I faced is how to store the Voronoi diagram.

I choose to use a data structure which is widely used in computational geometry called doubly connected edge list (DCEL).

My VoronoiDiagram class has four containers as fields:

I will detail each of them.

The Site class represents an input point. Each site has an index, which is useful to query them, coordinates and a pointer to their cell (face):

The vertices of the cells are represented by the Vertex class, they just have a coordinates field:

Here is the implementation of half-edges:

You might wonder what is a half-edge. An edge in a Voronoi diagram is shared by two adjacent cells. In the DCEL data structure, we split these edges in two half-edges, one for each cell, and they are linked by the twin pointer. Moreover, a half-edge has an origin vertex and a destination vertex. The incidentFace field points to the face to which the half-edge belongs to. Finally, in DCEL, cells are implemented as a circular doubly linked list of half-edges where adjacent half-edges are linked together. Thus the prev and next fields points to the previous and next half-edges in the cell.

On the image below, you can visualize all these fields for the red half-edge:

Finally, the Face class represents a cell and it just contains a pointer to its site and another to one of its half-edges. It does not matter which half-edge it is because a cell is a closed polygon. Thus we can access to all of its half-edges by traversing the circular linked list.

The standard way to implement the event queue is to use a priority queue. During the processing of site and circle events we may need to remove circle events from the queue because they are not valid anymore. But most of the standard implementations of priority queues do not allow to remove an element which is not the top one. In particular that is the case for std::priority_queue.

There are two ways to tackle this problem. The first and simplest one is to add a valid flag to events. We set valid to true initially. Then instead of removing the circle event from the queue, we just set its flag to false. Finally, when we process the events in the main loop, if the valid flag of an event equals to false, we simply discard it and process the next one.

The second method which I adopted is not to use std::priority_queue. Instead, I implemented my own priority queue which supports removal of any element it contains. The implementation of such a queue is pretty straightforward. I choose this method because I find it makes the code for the algorithm clearer.

The beachline data structure is the tricky part of the algorithm. If not implemented correctly there is no guarantee that the algorithm will run in \(O(n\log n)\). The key to reach this time complexity is to use a self-balancing tree. That’s easier said than done!

In most resources I have consulted (the two blog articles aforementioned and Computational Geometry), they advise to implement the beachline as a tree where interior nodes represent breakpoints and leaves represent arcs. But they do not indicate how to balance the tree. I think that this representation is not the best possible because:

Here is the definition of an Arc in my implementation:

I choose to use the red-black scheme to balance the beachline. My code is directly inspired from CLRS. The two interesting algorithms described in the chapter 13 of the book are insertFixup and deleteFixup which balance the tree after insertion/deletion.

However, we cannot reuse the insert method of the book because it uses keys to find the correct place where to insert a node. In Fortune’s algorithm we have no key, we only know that we want to insert an arc before or after another in the beachline. To do that, I create methods insertBefore and insertAfter:

The insertion of y before x is made in three steps:

Finally, the deletion method from the book can be implemented as it is.

Here is the output of the Fortune’s algorithm described above: 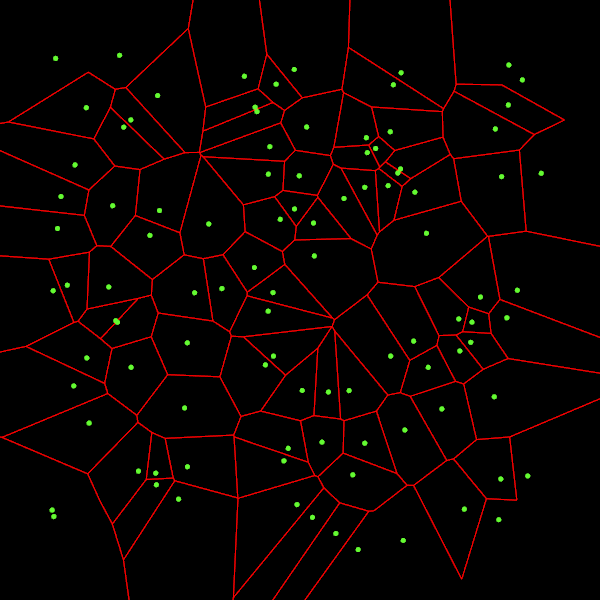 There is a little problem with some edges for cells on the border of the image: they are not drawn. That is because they are infinite.

Worse, a cell might not be in one piece. For instance, if we take three points aligned, the middle point will have two infinite half-edges not linked together. It is not very satisfactory because that means we cannot access to one of the half-edges as a cell is a linked list of edges.

Fortunately, Fortune’s algorithm gives us a way to quickly find the infinite edges: they correspond to the half-edges still in the beachline at the end of the algorithm.

My bounding algorithm takes a box as input and has three steps:

Step 1 is trivial, we just expand the box if it does not a contain a vertex.

Step 2 is pretty simple too, it just consists of computing intersections between rays and the box.

Step 3 is not very difficult neither, but it requires to be very careful. I do it in two steps. Firstly, I add the corners of the box to cells that need them in their vertices. Secondly, I make sure that all the vertices of a cell are linked by half-edges.

I encourage you to read the code or ask questions if you want more details on this part.

Here is the diagram output by the bounding algorithm: 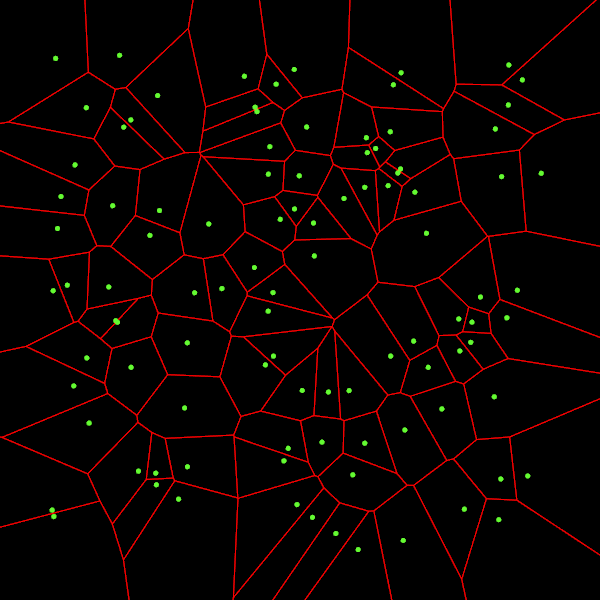 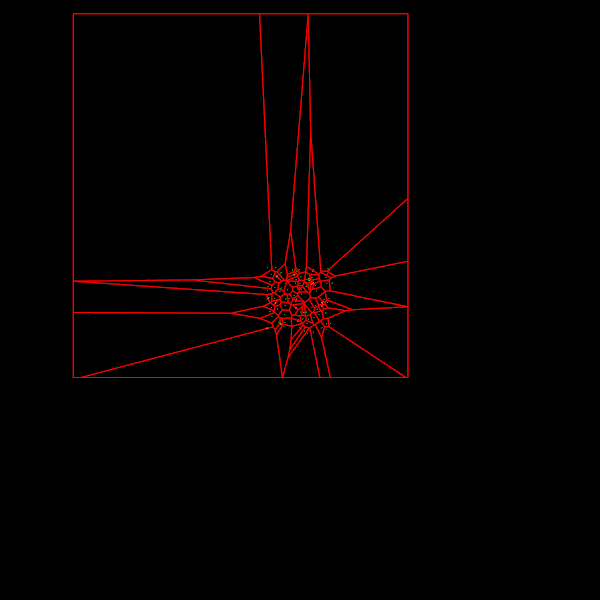 Intersection with a Box

Cool! But the first image at the top of the article is cooler, isn’t it?

In many applications, it is useful to have the intersection between a Voronoi diagram and a box, it is what is shown on the first image.

The good news is that it is a lot easier now that we have bounded the diagram. The bad news is that once again even if the algorithm is not over-complicated, we will have to be careful.

The idea is the following: for each cell we traverse its half-edges and we check the intersection between this half-edge and the box. There are five cases:

Uh, that’s a lot of cases. I made a picture to visualize them:

After we applied this algorithm to the bounded diagram, we have the expected result:

This article was pretty long. And I am sure that many things are still unclear. Nevertheless, I hope you find it useful. Do not hesitate to read the code if you want to see all the details and if you have any question you can ask them in the comment section below.

To finish this article and to be sure we have not done all of this for nothing I have measured the time it takes to compute the Voronoi diagram for different numbers of sites on my (cheap) laptop:

I have nothing to compare these durations with, but it seems blazing fast!