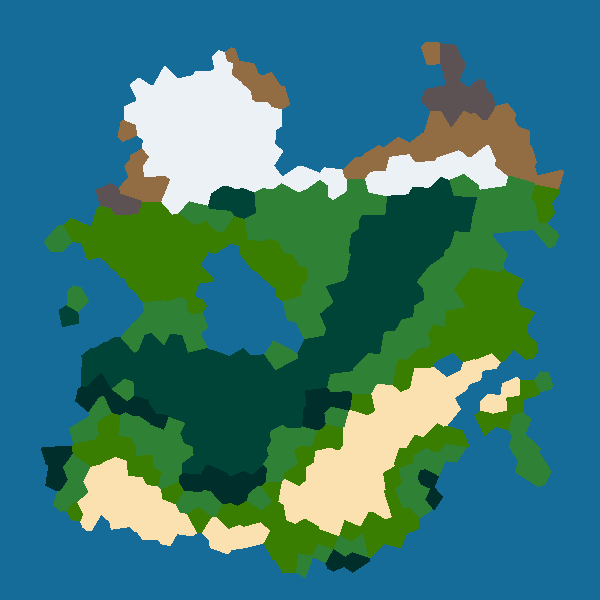 The first step is to divide the world into cells. I like the idea popularized by Amit Patel of using Voronoi cells. Thus I randomly generate a bunch of points and compute the Voronoi diagram using my own implementation of Fortune’s algorithm. I talked about it in this article but I have revamped the code and fixed many edge cases to turn it into a library called MyGAL.

Here are the results with 1024 points. For each step, I will show the result for four seeds:

Then to have something a bit less random, I apply Lloyd’s relaxation twice:

The next step is to assign a height to each cell to determine if a cell will be land or sea.

I start by generating some fractal noise using a minimalist library I wrote called noisette:

Then I scale the noise between 0 and 1 and multiply by a gaussian kernel centered on the center of the map to then obtain an island roughly circular and centered in the middle of the world.

Finally, I set the height of cells on the frontier of the world to zero to ensure that these cells will be seas later. And I redistribute the values so that half of the cells have a height smaller than 0.5 and the other half higher as 0.5 will be the threshold to be land:

The biome of a cell will be determined by its temperature and its moisture. Thus we need to generate both.

For temperature, I did not want something too much random as it does not feel right to me if there is a glacier next to a desert. Instead, I decided to generate temperatures so that it is cooler in the north of the island and warmer in the south as it is the case for countries in the north hemisphere of Earth. It is also the case for some fantasy worlds such as Westeros, the main continent of Game of Thrones where the North is cold and the southern regions are warmer.

To do that, I just warp a vertical linear gradient with some Perlin noise:

And here is the temperature of each cell (cold is blue and hot is red):

Then, we need to generate precipitation. I could have used a model which takes into account the height of each cell and wind as presented here and here.

But I wanted to start with something really simple so I just use raw Perlin noise again. I do not use fractal noise this time because I did not want the precipitation to vary too quickly:

Maybe I will use a more physically accurate model later but it seems sufficient for now.

At the moment, I have 8 different biomes:

I assign each of them using a Whittaker diagram. Here are the final results:

Before finishing this article, I must cite some other map generators that inspired me:

The next steps are to generate the rivers, the regions and placing some cities. See you next week for more!